Between boarding time and taking off you soon will be able to go to any city in the world thanks to SpaceX. Elon Musk who I've written about a few times... Recently put out this video:

Now you can travel intergalactically from NYC to Shanghai with only 39 minutes of flight time. This is the future of travel coming in 2024.

Burning Man comes with a lot of amazing experiences and stories for a first time visitor. It's a place where you need to go and see for yourself.  The one story I'm roughly journaling out for my own memory is about my first experience to the Temple in 2017.

Temple is known as this deep spiritual place on the playa where people share their personal messages through letters, prayers, and there own artistic inspirations to showcase things that have a deep meaning to them. For example there were writings on the wall that said "I Love you Dad. Sorry I didn't call you more." The most striking thing that happened as I walked through was a girl reading a poster on the wall and as shes emotionally reading and looking at the photo somebody says to her "What is the story behind the poster you put up and are reading."

Her story is as follows:

This is our friend Joey (Name possibly incorrect) from Salt Lake City. He came with us every year to Burning Man and was a big part of our camp. He was always so joyful and kind dancing around. Last winter he was shoveling snow for his neighbors during a snow storm and a new neighbor in the area didn't know who he was so she called the police and it was two cops who showed up when he got frightened and defensive with his shovel and the rookie police officer puled out his gun and accidentally shot him in self defense not realizing it was a shovel. She said it was very sad and he was with them every year at burning man but this year he's still there in spirit. I then said wow. Thats truly amazing. So you just put up this poster to honor him?

She says oh no. Not at all I just happen to be here right now at the exact moment you were and saw this. I have absolutely no idea who put this up....

“If you already know it's going to work, it's not an experiment, and only through experimentation can you get real invention. The most important inventions come from trial and error with lots of failure, and the failure is critical, and it's also embarrassing.” – Jeff Bezos

Bezos may be talking about the Amazon Fire Phone that came out in September of 2014 and didn't sell at all (literally I think the total sold is less than 1,000), which from the outside, was considered an embarrassing failure for the company but true entrepreneurs take chances, learn, and adapt. If you look at the other chances he took then you may think he's a genius for the successes such as the creation of the ever so popular Amazon Echo, and dozens of innovations that made the  original company named Cadabra Inc. but was changed to Amazon in 1996 as the first major online bookseller and today one of the biggest companies of all time.

Startups fail all the time. Obsess over your clients and fail fast according to Bezos.

Puma & Adidas Were Once One

Reading through this article on the downfall of Nike from Quartz: 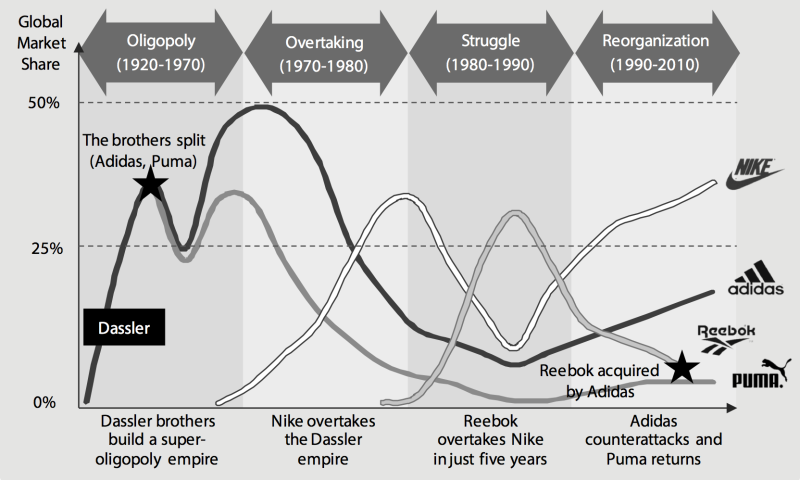 and it has this graph below that showcased to me something that I never knew and assume most people don't know. That the Dassler brothers from Germany had a shoe company and it consisted of Puma and Adidas. This former oligopoly started to diminish when Nike came out decades later and within only 5 years Reebok had become the biggest shoe company in the world. As with all cycles things change and Nike came back and still leads today despite a recent announcement to cut 2% of their workforce and the failure to come out with a blockbuster product in the last couple of years. Puma at one point in time had 30% of the market and today is closer to 5% while no company has ever had more than 50% of the entire market which Adidas once owned in the early 1970's.

Hurricanes put in the highest levels of fear, uncertainty, and doubt in people. The media exploits these fears and it is better to be safe than sorry. The problem IMO with Hurricanes are that you never know where in the path it's going to hit, how much damage its going to inflict, and how bad it will be when it gets there. Lets see what happens with Hurricane Irma & Jose.