A netflix documentary showcasing with real clinical and scientific proof that proper diet can reduce and reverse coronary heart disease and other health related issues that we suffer from based on our diets. The film is on Netflix and is a great way to entertain yourself on the benefits of a plant based diet and the drawbacks of eating processed foods. It also touches on a point that Pricenomics covered that big AG is using our school system to promote and push processed foods.

I also was intrigued by the fact that they said drinking milk did not improve bone density but was yet the opposite. For those of you who remember the Milk campaigns promoting Osteoporosis and that famous Cal Ripken poster with him saying Drink Milk and build Iron Man Strong bones were all being deceived.

Always glad to support sustainable and eco-friendly products that can make a meaningful impact on the world at scale.

Beyond Meat a Delicious Vegan Alternative

There are some great vegan alternatives that I have discovered through specific Whole Foods. One that is growing in popularity is Beyond Meat who offers Plant Based Chicken, Beef, and a Hamburger (I haven't tried to Hamburger yet but hear it's delicious).

Beyond Meat is great because their selections are just as good as the real thing but are a healthier alternative. The only downside or complaint one can say about Beyond Meats products are that it's more expensive then most meats. The founder is also from Maryland where I am from and runs Beyond Meat out of El Segundo, California.

It's a sustainable solution that solves a big need in the world. Hat tip to the Beyond Meat engineers.

JackFruit is also another good vegan alternative that is growing in popularity.

The best sushi I have ever had in my life was at.... Jiro Sushi 2 in Roppongi an upscale Tokyo suburb. As you can see by the beautiful split piece Prawn Sushi below there is no expense spared. I found Jiro through a popular netflix documentary called Jiro Dreams of Sushi. It was in this film that a 90 year old Jiro dedicates his entire life to the art of mastering the craft of Sushi. (Read more below the image) 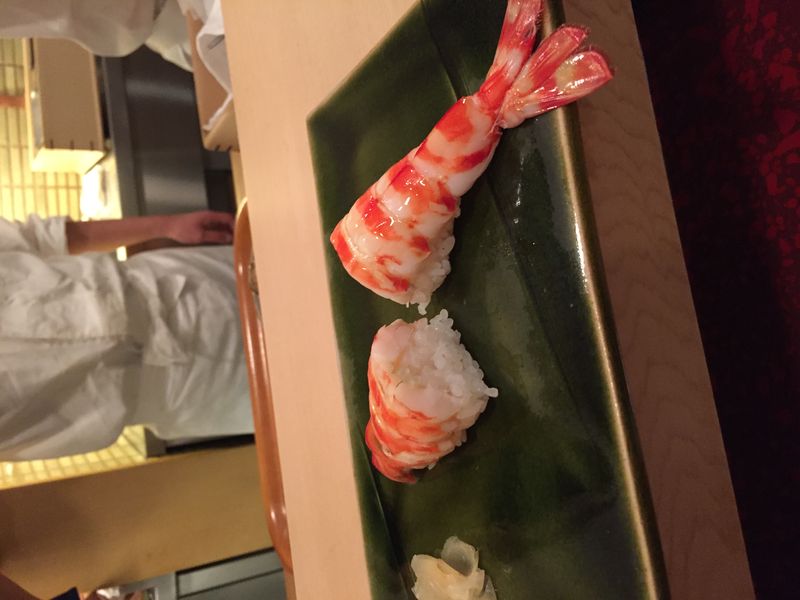 Jiro has only worked in one field in his life and thinks of himself as an artist not just a chef. He takes measures well beyond what any other restaurant owner would ever do to create the most exquisite meal you will ever have thanks to it's insane attention to detail.

He has two sons and the youngest went out on his own and started his own restaurant which is an almost exact replica of the shop in Ginza located in the Hibiya subway station. The only difference is that Jiro is left handed and his son is right handed so they are symmetrical. The Roppongi location has 8 seats at the bar and two tables each with four chairs.

My friend Marc joked that the two tables were there for guests to wait while they were told to sit at the bar. The irony is thats exactly what the tables are there for.

The lunch course is 18,700 Yen and is the best meal you will ever have. It is very hard to get into the Ginza location so I highly suggest everybody to dine and support his sons location if you are in Tokyo and would like to have the best Sushi meal of your life. My favorite pieces were the Sea Eel, Sea Urchin (I typically hate sea urchin but this was unbelieveable), The Prawn, all of the Tuna pieces, and of course the Tamago (egg). The amount of detail and thought that goes into each piece is something that you need to indulge in yourself and not for me to spoil.

If you have watched the film then you understand the importance of the Tamago and the work that goes into perfectly making that finishing piece. At the end of the meal you are invited to take photos with the chefs and they have books on Jiro which are signed by the famous craftsmen himself.

My favorite part of the experience beyond the meal was this one instance which I will write about again.

The art of Modesty

Jiro's son Takashi has been mastering the art of Sushi for almost his entire life (Jiro started when he left home at age 7 and is now 90). So with a life long of Sushi and the fact that a copy of Jiro Ono's book was signed and purchased the question was asked of his son:

Would you mind signing a copy of this book for me?

His answer was as follows:

"You think because Jiro is my father and I am his son that I can sign the book next to his name but he is Master and I am nothing but a student still. I will not be able to honor your request."

Posted at 12:04 AM in Food and Drink, Richart Ruddie, Travel | Permalink

Why the Chipotle Bash Is Wrong

There is an awfully supiscious and INCORRECT bashing going on right now. This is aimed at popular fast casual burrito chain Chipotle where a website called Chubbychipotle.com launching an incorrect and unverified claims that if you eat Chipotle Burritos alone you will get FAT.

Folks at Consumer Freedom really need to fact check or admit that they are being paid off by McDonalds and Subway executives because they are getting slaughtered (no pun intended) by Chipotles better food, better ingredients, same price model.

First Here is the text from the ad (Graphic not posted due to fears of copyright infringement. We want this post to live on)

Healthy  Eat two "all natural" chipotle burritos a week and you could gain 40 pounds in a year.

The negative ad states that :"Chipotle makes high-calorie burrtios and tacos but spends most of its marketing dollars stressing how "sustainable" it is, or how its fods are antibiotic-free (until it sells meat that isn't). All these claims sound good, but experts say they don't make their food healther. Experts do agree that eating 1,300-1,500 calorie burriots will probably make you fat."

Now anybody who has read the Fat Loss Bands Books would know that it's not what you eat but rather the calories in and calories out principle. If you were to eat Oatmeal for breakfast and a half pound of Grilled Chicken and Steamed Broccoli for Lunch and dinner each day then you could end up looking like the guy in the photo. Reason is it's not all about what you eat but how much exercise and proper dieting that goes into the mix.

That advertisement is absolute non-sense and I will gladly educate Chipotle haters free of charge.

The Best Places for Healthy Food in Baltimore, Maryland

California and New York certainly lead the way with an abundance of healthy lifestyle choices. Whether its a yoga studio on every block, a cold pressed juice bar, or organic restaurants. Baltimore is not quite there yet but they are light years ahead of Chicago in my opinion.

I have found a few great places to indulge in local healthy fare in Baltimore and they are:

Hope this helps for those in and around the Baltimore area looking for a shot of wheatgrass or something that tastes good and is good for you :)

Eventually there will be a healthy option like the Flying Avocado in Owings Mills.

Richat Ruddie on the Importance of Eating Healthy

I have blogged over at Epicurous about eating Healthy and love that more and more individuals are taking notice of the importance of putting good food into your body. "Eating Healthy is Being Healthy".

In my opinion it does take work and effort to prepare healthy meals but if you are motivated to live longer and to stay in shape then you will succeed. During the writing of the Fat Loss Bands Book we made it very clear to readers that the only person that you cheat on a cheat day is "yourself".