Richart Ruddie on the importance of Culture

Culture is great not just for business but for learning the ways of the world. Thats why there is such an important emphasis to diversify your travels. Traveling around the world to new countries, cities, provinces/states, and continents that you only hear about in books or the internet growing up. When you do so you have the opportunity to learn about how other societies operate.

When you experience a new city it's enlightening to meet people of different cultures, try their food, view their buildings and architecture, see the spirit of the people and this helps to change your perspective from potential subconscious biases you may have had previously. When you return and meet somebody from that culture or place you've visited you now have something to talk about and the ability to relate. Outside of reading books this is a great way to build knowledge, understandings of others, and traveling and eating are a great way to live life to the fullest.

So if you follow my ZeeMap or Mapster showcasing all the places "Richart Ruddie" has been to know that there are so many more and yet so little time to make it to them all but if there's a will there is a way.

AI is going to change the way we make graphic designs for blog posts, create art, nfts, create royalty free music and sound clips. There's so many positive benefits being created with the future of DALLE-2 and the AI revolution thats on the horizon. Here are a couple of cool references to check out and use:

https://app.inferkit.com/demo - This lets you put in subject matter and see how the machine writes a story around it.

Google CoLAb - This is the place to get started for Machine Learning and has a monthly fee.

Robert Bruce Carter covered an AI Jukebox where the Github list of 4,111 artists are compiled and used to make sound clips and music. You can see his story about it here.

For image creation on the fly you can register with OpenAI this is a game changer that is going to destroy the royalty image business overnight. Think about how the iPhone destroyed MP3 players. Who is going to want stock images of a team at work for a fee when they can generate it via AI in seconds and ensure it's unique and is not going to be recreated?

For fun I put in Richart Ruddie to see what images would be created in the OpenAI image generator and here is what it created:

As you can see I don't look like either men on the left or right and I don't have a sculpture or statue in a square but maybe it was focusing on Rich and Art? That could be the reasoning for the ship sailing. To determine if a photo is created via OpenAI look for the colors of the rainbow in the bottom right corner.

Since I'm an art collector and fan I typed in Picasso Painting on the Beach. The initial photos had an easel on the sand. A clear operator error that was adjusted to "a picasso painting of the beach" and this is what it generated:

Reflecting Back on 9/11 20 years ago from Owings Mills

You always remember where you were when you heard the news about the twin towers. That's the echo of today that I constantly hear when September 11, 2001 comes up. Like other monumental historical moments from my parents generation about the JFK shooting or landing on the moon September 11, 2001 was one of the biggest moments of my pre-adult life that I remember vividly.

The other big global change that I remember is the handoff of Hong Kong from the British back to China where my 7th grade middle score teacher Mrs. Sanacore said this is a pivotal moment that will have great impact in the future. Today that makes more sense to me than it did than as all I remember seeing was the fireworks display over the Bay in Hong Kong.

Thinking about it on the 20th anniversary I was trying to figure out if it was in my 10th grade or 11th grade mathematics class. On September 10th, 2001 Brian & Jon two friends that sat next to me chatted about Brians uncle and how he owned a ton of stock in this company XM Radio that was the future of radio. I had just turned 16 less than a month earlier and believe that I had one of the classic Nokia phones through Cingular Wireless which was my first cell phone.

The next day sitting in Math class we had the prototypical standard geeky middle aged male math teacher who was going through the lesson plans for that day when Jon who was a troubled student at the time came in late and the teacher asked if he had a note. He said they are about to make an announcement about the planes that hit the buildings in New York. That didn't sink in then and when the intercom came on they asked for all students to report back to their home room for an announcement.

Ms. McCall I believe was her name was my home room and 1st period teacher. She rolled in one of those televisions on a cart that we used back in the earlier 2000's and we watched as the World Trade Centers burned and had no idea of the impact at the time. My friend Ryan and I were in the room watching in disbelief wondering if this was real life or a cartoon as it just looked then and as I watched replays yesterday unreal....

What followed was the teacher saying that this is very serious and you will remember this for the rest of your life. This is one of the biggest moments in American history. As the 2nd tower to get hit but the 1st to fall fell over we asked why it collapsed like that versus falling over like a tree timbering over in the woods? They mentioned the attacks in Washington D.C. as well and one of the students who's father worked in Washington D.C. was pale and worried that her family could have been in danger with so many unknowns in the world at that given moment especially for high school students who didn't have smart phones or connectivity like there is today.

School was evacuated as I believe was the case across the country. No planes were in the sky and we headed to Burger King on Reisterstown Road in Owings Mills, Maryland. I didn't have a car yet and don't believe I had my drivers license quite yet but my long time friend Nick took me home and I spoke to my mom about what was going on and that things were scary. A neighbor named Brian and I picked up our lacrosse sticks and he said Richart I'm going to explain to you whats going on and what happened today.

That was the 1st time I had ever heard the name Osama Bin Laden. Learned about terrorist in the middle east and other global issues that hadn't penetrated my teenager mind. Ruddie there are a lot of bad people out there but this guy funds terrorism and comes from a well known family and he's been plotting something for a while. We tossed the lacrosse ball till it got dark and myself along with the rest of the world tuned in to watch George Bush's speech that night.

The next day I was worried and went to school late with a note, not sure what the next days events would bring. We were all on high alert and canceled our future vacation plans and flights.

As we fast forward 20 years later and reflect back it's insurmontable what happened that day. Watching documentaries and reading in depth articles about loved ones who disappeared that day and vanished never to be seen again. We face new attacks every day whether it's covid-19 or domestic terrorism. If you look at WWII we lost over 20,000,000 humans over the course of 6 years. That averages out over 2,190 days 9,132 humans dying every day. We lost 80,000 from drug overdoses last year and this also tears aparts families and communities.. There are so many landmines and attacks we have to avoid each day of our lives. If you wake up then you are already ahead of millions who perished before you. Whether you're waking up in Palm Beach, Florida or in a jail cell waking up is a big win that you should appreciate if you look back at history.

Days like that make you appreciate life and that we shall never forget.

For those who told me that the Richart D Ruddie Podcast idea would have merit and could really grow into being an interesting podcast. I'm looking for examples to showcase and you can really pick any politician and see the comments from the readers.

Here's one about the earthquake in Haiti and then the first few comments and this is for the president of the united states of america: 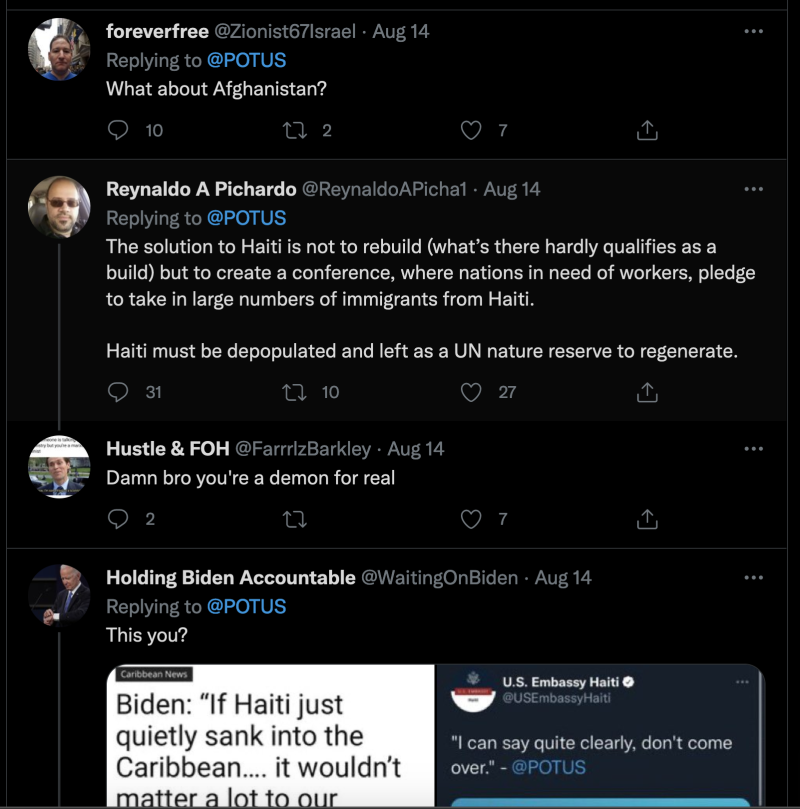 If you've ever gone through twitter and read the latest comments on any political person, entrepreneur, celebrity or famous persons tweets you will be shocked about the intelligence or lack there of. It's a scary thing to see and I contemplated starting the Richart D Ruddie words of wisdom podcast. The premise of the show would be trolling through tweets on twitter and comments on Instagram and seeing what outlandish commentary people are saying on the internet.

The comments that I've seen are a combination of scary and people really need to educate themselves more on logic and ethics. As a friend who is a state prosecutor said that he's all but lot hope for humanity dealing with the criminals and the system. The people who come through the system have no hope of rehabilitation or of being educated to think differently and are a big issue we deal with as a society. While I hope he's incorrect it's interesting in hearing his opinion after working in the court system all this time and comparing that to the comments that I see on social media on posts and the issues that we as a society will have to deal with in the future. 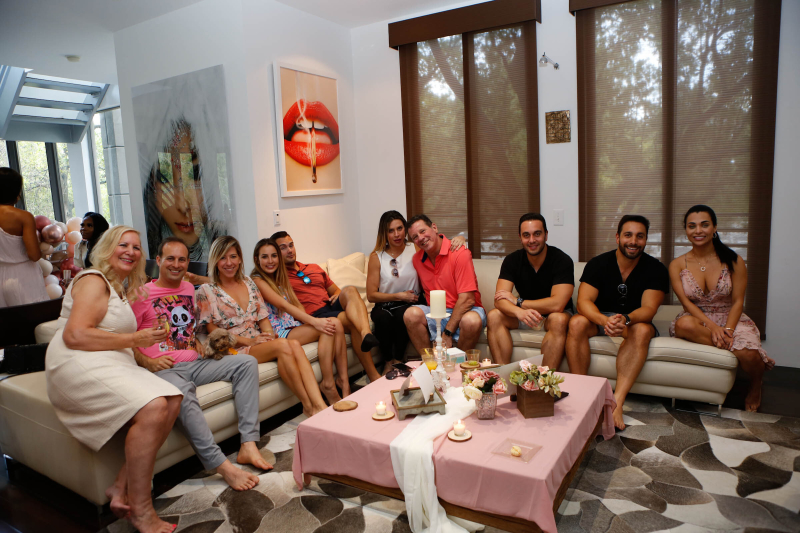 Some of my latest  tweets are some advice to follow:

Sustainability contributes to resilience. Whether it's in farming or in values be sustainable.

Please note my name is not spelled richard ruddie